The long, rich history of our organizations began over a century ago in San Francisco. The Franciscan Sisters of the Sacred Heart founded, led and/or grew each of these entities with a single purpose in mind – to care for those in need. That history of compassionate service continues today in St. Joseph’s Health Support Alliance, QueensCare and QueensCare Health Centers, thanks to the hard work, sacrifice and fine example set by the Sisters. 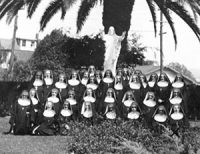 St. Joseph’s and QueensCare’s history began in 1898, when the Franciscan Sisters answered the call of the Roman Catholic Archbishop of San Francisco to travel from their motherhouse in the Midwest to open St. Joseph’s Hospital in San Francisco.

The story for QueensCare Health Centers began in 1897 with the opening of a clinic by the Society of El Hogar Feliz (Happy Home) to care for abandoned and neglected children in Los Angeles. The Society was founded by Bishop George Montgomery and located in Our Lady of the Angels parish, the church now known as Our Lady Queen of the Angels, or La Placita, near Olvera Street in downtown Los Angeles. 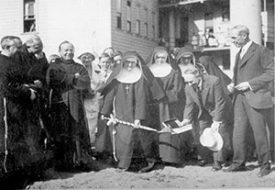 QueensCare’s Los Angeles story began in 1925 when, having heard of the wonderful impact the Sisters were making in San Francisco, Bishop Cantwell of Los Angeles asked them to come here to open a hospital. He offered no funding, but gave them permission to raise alms. Queen of Angels Hospital, the origin of QueensCare, was born and grew to become the largest private hospital west of the Mississippi for a time. The original campus was located adjacent to the 101 Freeway in the Silverlake area of Los Angeles. 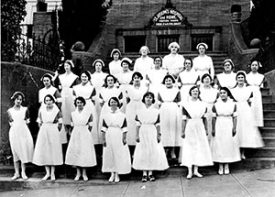 For a host of reasons, in the late 1970’s the Sisters decided to sell St. Joseph’s Hospital in San Francisco. They turned for help to Art Barron & Joe Brandlin, their two lay advisors who had worked for the Sisters for many years. Art Barron had been their Chief Financial Officer since 1951 and Joe Brandlin had been their legal counsel in Los Angeles since 1963. The two gentlemen formed a board of directors and submitted signed, undated letters of resignation to the Sisters, so that the Sister could step back into control any time they chose. 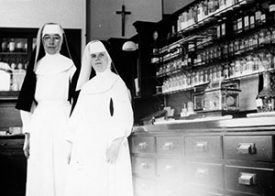 The ensuing years for Queen of Angels saw the early exit of the for-profit lessee, a subsequent lease to the Daughters of Charity and the eventual resumption of control by the Franciscan Sisters of the Sacred Heart in April of 1987. The Sisters named Brandlin & Barron Chair and Vice Chair of the board, respectively, and St. Joseph’s provided approximately $4 million in much needed interest free loans and gifts to support the hospital operations. A few months later the Whittier Narrows earthquake in Southern California hit and severely damaged the Queen of Angels Hospital building. Again, St. Joseph’s provided grants to cover immediate repairs to the aged building – but a long term solution was needed. 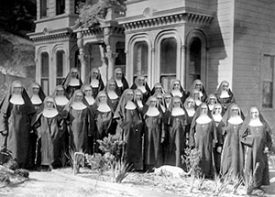 Throughout this time, the small clinic established at La Placita appears to have been folded into the Santa Rita Clinic established in 1919 by Bishop Cantwell on Main Street. When the Sisters added another 100 beds to Queen of Angels in 1932, Bishop Cantwell “suggested” that they allow space for the Santa Rita Clinic, which they did, assuming sponsorship of it two years later.

It was in 1982, while the Daughters of Charity were operating the hospital that they changed the name and incorporated the clinic as Queen of Angels Clinic, Inc., and then moved it to the campus of St. Anne’s Maternity Home on Occidental Blvd. This followed the change a year earlier of the hospital’s name from Queen of Angels Hospital to Queen of Angels Medical Center. In 1987 when the Franciscans resumed control of the hospital they also resumed sponsorship of the Clinic and a year later, changed its name to Franciscan Health Center. 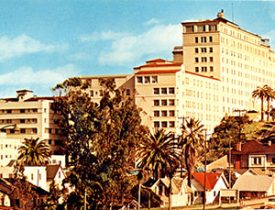 Serendipitously, in 1989 the State of California ordered Hollywood Presbyterian Hospital to seek a merger with another hospital due to its default on a $56 million bond issue guaranteed by the State. Of four hospitals in the mix, Queen of Angels ultimately reached an agreement, resolving Hollywood Presbyterian’s financial difficulties and Queen of Angels earthquake damage problems in one transaction.

The merger held great financial risks, including the need for additional borrowing, part of which St. Joseph’s provided. Before the transaction closed, however, the Franciscan Sisters of the Sacred Heart decided that while they wanted the merger to go forward, it was too much risk for the Sisters to take on. In spite of opinions from outside legal counsel both in Los Angeles and Chicago to the contrary, the Sisters remained concerned that they would jeopardize their community and decided to turn over control to Barron & Brandlin through St. Joseph’s. In an abundance of caution, the Sisters returned the undated, signed resignations to the two men that they had held for 10 years. The hospitals merged in 1989, becoming Queen of Angels-Hollywood Presbyterian Medical Center (QA-HPMC). 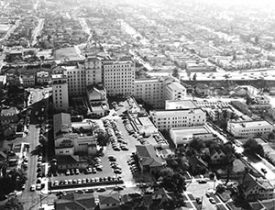 The turn around of the merged hospital was truly remarkable. With Hollywood Presbyterian having lost about $18 million per year for the 2 years prior to the merger, and the merged medical center an additional $12 million during the year of the merger, the financial challenges were daunting. Under the control of St. Joseph’s and the new lay board, QA-HPMC began to generate a surplus two years after the merger was completed and remained profitable every year thereafter. 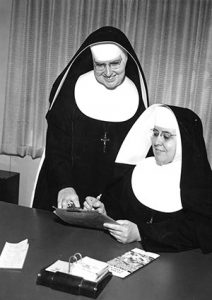 Due to emerging hospital industry changes in the 1990s and through the vision of the late Joe Brandlin and Art Barron, in 1998, the Board of Directors of QA-HPMC voted to sell the hospital operations and form a new charity focused on healthcare for low-income Los Angeles County residents. The sale became final on June 12, 1998, and the name selected for the resulting charity was QueensCare. The four hospital outpatient clinics existing at the time of the sale were folded into the Franciscan Clinics and a seamless system of care was created to help low income uninsured residents of Los Angeles.

With St. Joseph’s Health Support Alliance as their corporate member, QueensCare and Franciscan Clinics initially operated as sister organizations following the sale, and shared a mission of helping low-income people access needed healthcare. This continued until 2001 when it became clear that Franciscan Clinics should become a Federally Qualified Health Center (FQHC) in part, to access needed federal funding. As required, Franciscan Clinics became independent of St. Joseph’s and the legal relationship with QueensCare ended when it became an FQHC in 2003.

In 2008 Franciscan Clinics dropped its corporate name, in favor of QueensCare Family Clinics by which it was most commonly known, and then in 2013, changed it again to QueensCare Health Centers to reflect the breadth of services it provided in the community. QueensCare and QueensCare Health Centers, two independent non-profits, have operated in partnership since the sale of the hospital in 1998, providing critical healthcare services to residents across L.A. County.

As an FQHC, QueensCare Health Centers operates 5 sites; cares for approximately 25,000 patients, regardless of ability to pay; and employs approximately 250 staff who are a part of the communities served. Meanwhile, QueensCare provides roughly $20 million a year in direct healthcare services, scholarships, and grants to organizations that serve healthcare needs of low-income communities.

The tradition of compassionate service that began with the Franciscan Sisters of the Sacred Heart continues today and into the future, thanks to the dedication of St. Joseph’s Health Support Alliance, QueensCare and QueensCare Health Centers boards, staff, and partners, all working together to improve the health of underserved Los Angeles County residents.